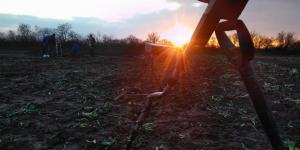 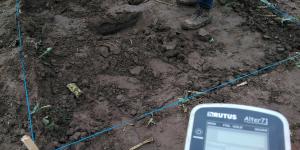 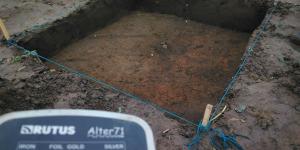 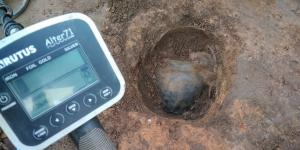 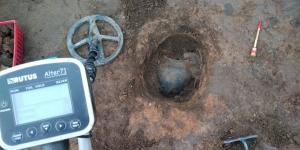 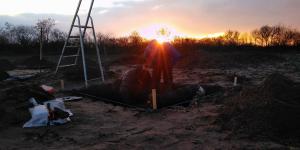 And everything started as usual...

The phone rings, there is another opportunity to help in archaeological research, a new adventure with treasure. This time the call is about the dig in Kujawy - a real treat for adventurers.

Clearly, there was nothing left to do but to pack the equipment for the car and set off to the North. The honest, old Land Rover was filled with detectors as well as the new MARS MD test search coils and we filled up with fuel at a nearby station. My mug was filled with Yerba Mate, so everything I needed was ready to support science.

As this is not the best time of year, I knew immediately that this would not be an easy trip, and so it turned out. Cold, raining and the rest, but you find a way to manage somehow. In the end, the old proverb says that there is no bad weather, only bad clothes, but struggling with mud is a challenge, nevertheless you must not give up. At the dig I learned that the aim of the current research was to identify pre-Roman cemeteries, which continued to be used into the Roman period, which archaeologists had predicted based on artefacts discovered in the area during the spring.

Fibulas, as well as melted pieces of bronze, made it clear that at some point in time there had been a graveyard there. The only question which remained was whether anything remained under the layer of arable soil, or if the farmer had destroyed all traces with his merciless plough.

Therefore, my plan was as follows: for more than a week to walk in the area of the cemetery (square 50-70 m in diameter) and recover every non-ferrous metal identified from the arable layer, and not to make things easier also to recover some iron. Each artefact recovered from the arable layer would have it’s position recorded with the help of an RTK device (such as GPS), of course, every interesting find I photographed as a souvenir on the detector. Everything would look typical, except for one detail...

For many years, I have always used two detectors (motion one for micro-non-ferrous metals and All metal non-motion one to complement the motion one). This has surprised many people, including my friends, because sometimes I use both at the same time, in one hand a motion detector, in the other All metal non-motion detector. Motion detector for small colors, and a All metal non-motion for large objects - it’s not easy, but there were benefits. Over the years I've been looking for equipment that will allow me to concentrate these operation modes in one device. There are only a few detectors in the world that have well-developed dual mode. As XLT and DFX were too outdated, I was looking for something newer. In turn, the new Spectra is too expensive for me, given the way I abuse my equipment. It turned out that what I was looking for myself had come to me some time ago, in a prototype version. The constructor was keen for me to share my insights into the detector, which he then translated it into patches in the software and implemented it into the detector. So what more could I have wished for?

That is why I have been dealing with Alter71 for some time now, so I now had the opportunity to test MARS MD search coils, which are expanding the product range. I thought that for this general search, the ideal solution would be to put a sniper MARS and test her out in this area, while also learning about the advantages and disadvantages. I completely surprised myself, and was actually positively surprised that I found "my signal" with a sniper.

But before I describe what happened, I have to explain why I am such a supporter of dual mode operation. Because it was only thanks to this that I was able to discover these artefacts. Since dual mode is a compilation of two modes together: motion with All metal non-motion, the same information can be obtained at the same time during the search. More information means that we are looking with greater awareness, we can better judge what we are looking at. As a result of the non-motion mode, we can hear the quantity, size and depth of mainly iron, and by using this we are able to set the optimum speed of motion mode (Reaction) in a given place in relation to the quantity and density of iron.

Imagine this example: a perfectly clean field and just in the middle of the field a place where there once stood a house (littered). If we are looking only in motion mode and it is still with discrimination, it may turn out that we will pass over this without even noticing it. On the other hand, in the dual mode, we will immediately hear that we are passing through a place where there is a lot of fine iron, thus we know what Reaction we have and how to apply the optimal search coil movement so that the motion channel will be able to signal the appearance of a non-ferrous object in these conditions.

This is one of several positive features of the dual mode. Another is the possibility of picking up signals that are strange and unusual, which, for many factors, wouldn't have been signaled by motion detectors. Large, deeply located objects often do not give signals in motion mode – and if this “something” is hidden underneath iron debris – then it's game over. Of course, in order for the dual mode to give the maximum amount of information it must have VCO (change of tone in non-motion mode depending on the depth) this was not possible in previous models of the Polish manufacturer or if it did, it not work as I wanted - but it was enough to "click" in the software and it's good! ;-)

But let's get back to the heart of the matter - to the field full of mud and signals. On one of the first days during the search I came across a bit of strange signal between iron rubbish, namely from the All metal non-motion mode (low SAT) it was possible to hear some weak signal in the rubbish. It was so strange that the motion mode refused to even speak, which was already quite suspicious. I dug a larger hole in the arable layer, thus I removed some small iron rubbish to give me the opportunity to allow motion channel to work better, but the only thing I heard was the increase of this signal.

I informed archaeologists that I had found something large there, which may lie relatively deep. I received information that in this case, at the end of the excavation, a small control trench would be opened there. I found this signal close to some opened excavations, in which the archaeologists had found some beautiful crematory and skeletal graves from the pre-Roman period and a bit later. Time passed, and I was spinning around and removing from the arable layer various curiosities, which this had been turned over for many centuries by the farmer using a plough. Beautiful fibula, fragments of molten decorations probably coming from funeral pyres, Roman coins, and interesting burned-out iron objects, but all the time I was thinking: what is behind this unusual signal?

Of course, not only did I go with a detector in this area, there were many other detectors working there for over a week, including AT PRO and several Deus, everyone walked and trampled in the place where there was "my signal", but like me, in motion mode no one heard anything, not paying attention to the fact that "something" there sits in the ground. Only thanks to the dual mode I found this bizarre signal and waited for it to be taken further with the archaeological methods.

Less than two weeks passed and the time came to mark out the excavation for "my" signal. I kept spinning around the working archaeologists and peeked at what was happening there. You know how fun it is when your signal is found, and the archaeologists have been digging up every piece of ground.

After some time, the archaeologists dug up to the intact soil under the layer of arable soil, in this case clay which had never been disturbed by man, in the middle there was a black splotch which was clearly visible. So, someone had once dug a hole there, the question was for what purpose, and what's sitting there. After digging down about 50 cm of the ground, I checked once for "my signal" out of curiosity and it turned out that after removing this amount of ground the detector reacts completely differently, now the signal is heard almost a few dozen cm above the field and even the motion mode indicates great conductivity for a big piece of metal. Well, you have to be patient and wait.

The archaeologists slowly and meticulously researched and documented the stain, and as they did the outlines and large fragments of burnt clay vessels began to appear. Bit by bit using archaeological methods, scientists opened this time capsule, documenting their actions every now and then. After some time, it turned out that the burnt shells form a rather thick layer, but the metals were still not there.

When I checked with Pinpointer, it turned out that a terribly strong signal was already close. I was just playing with a video camera and I was filming an archaeologist at work, who looked at the study manager with a strange expression on the next movement of the spatula. I asked "WHAT IS IT?", the answer was: "BRONZE VESSEL". And euphoria began, and thoughts began to whirl, whether whole or not destroyed, how big, and whose grave. After many hours of meticulous and methodical exploration, it turned out that in the grave, apart from the great bronze vessel called SITULA, there were more small bronze and iron objects and even burnt iron elements of the casket (upholstery and closure). After extracting my signal to the surface, which turned out to be a large bronze Roman vessel, another question appeared: "what's inside?". As the vessel is filled with earth, in which protruding fragments of burnt fragments of bones could be seen, the analysis of the vessel will probably take place in "laboratory" conditions, and therefore we did not discover what was inside immediately.

Hoping for another interesting discovery, this time inside a jug I need to be patient. I used to have a similar one, although it was thick, really thick in that pitcher;) which everyone can now see in the museum at the exhibition in Czermna (http://muzeum.powiat-tomaszowski.com.pl/pl/files/userfilesimage/_DSF4312_x_1. jpg). So as soon as I find out what secrets the "my signal" hides in the middle, I will probably write the second part of this story, but simply the act of discovering this grave already gives great information about the manner and quality of burying the dead in that period and the region. It’s amazing, I recommend that everyone follows these steps: experience, see and understand what it means to methodically extract a find by scientists. 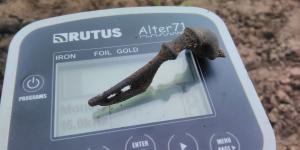 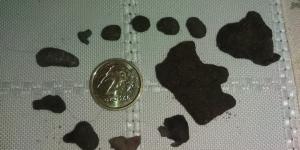 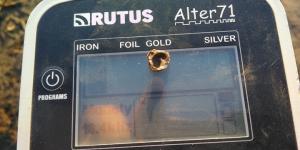 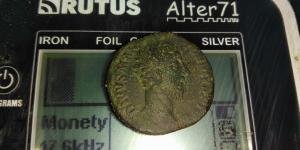 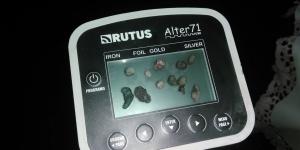 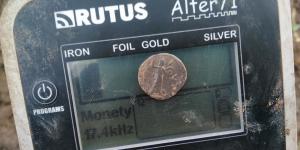 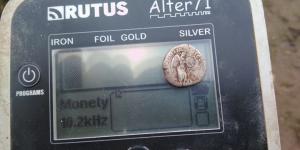 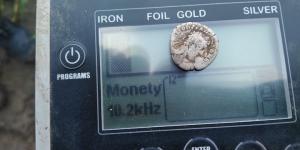 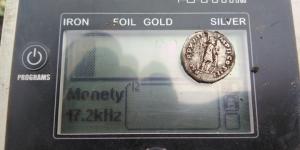 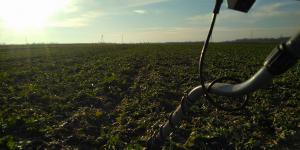 We use cookies to give you the best online experience. If you do not wish to benefit from this, then you can change your cookie settings by adjusting the options in your browser.